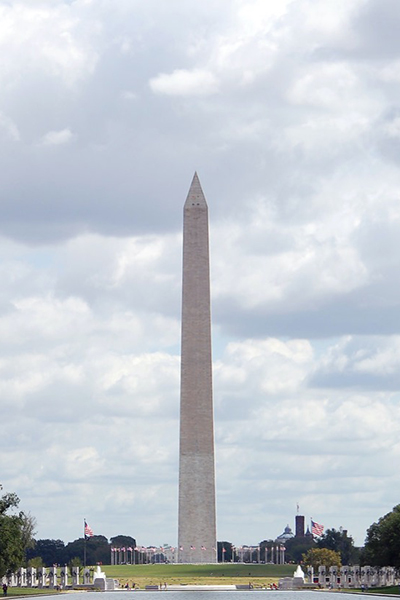 What’s wrong with the Washington Monument?

Have you noticed that the Washington Monument is two different colors of white? That’s because of Congress! The initial tranche of money allocated to construction ran out, and it took 20 years to get any new money allocated. By the time they got back to work, the quarry that generated the marble had been tapped out, so they got the rest of the marble from a different quarry. When it was finished it looked great…but then the two marbles weathered differently. So, as with anything annoying about DC, blame Congress!

References:
Why is the Washington Monument two different colors? 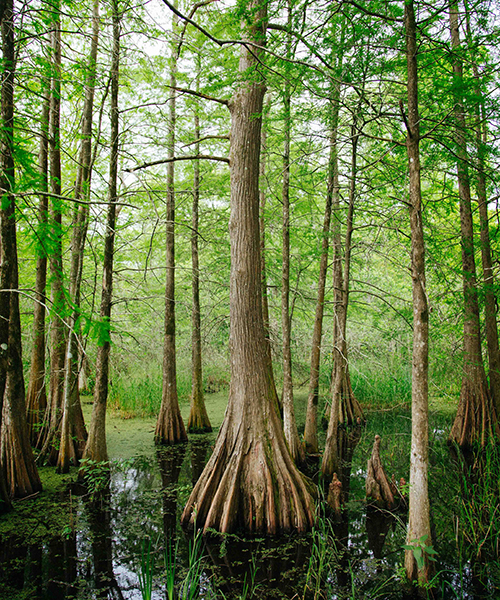 Image by Kyle Glenn on Unsplash 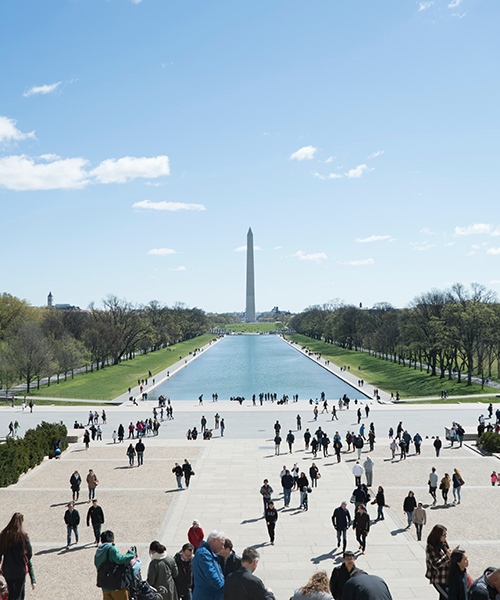 Image by Kotaro Yamauchi on Unsplash

“DC was built on a swamp.”
“The mosquitos are everywhere.”
“The Washington Monument is sinking.”
“Swamp swamp swampy swamp swamp!”

Well, it’s true that mosquitos suck (pun intended) and that the Washington Monument is sinking (2.2 inches since 1901, and sort-of 10 inches shorter than the brochures, since we measure buildings differently now than in the mid-1800s). When you come to Nerve DC, you can measure it yourself! But it’s not actually true that DC is or ever was a swamp.

When the city was built, only 2% of the original city (the area south of Florida Avenue, which is a fraction of the size of the current city) fit the definition of a swamp – 100 acres out of the current 41,000 acres were swampland. By contrast, both Chicago and New Orleans were actually built in swamps.

Anyway, what’s wrong with swamps? They clean water, are natural flood protectors, they have immense amounts of wildlife, and they’re great at carbon sequestration. Go hug your nearest swamp!

References:
“Did the Washington monument really shrink? Scientists say not really” from The Guardian
“No, D.C. isn’t really built on a swamp” from The Washington Post
Six Reasons Why You Should Like Swamps

The DC that was 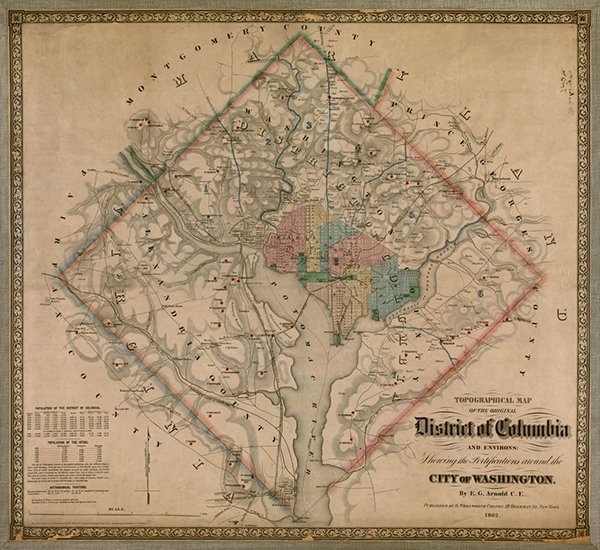 Image by The Library of Congress

The DC that is 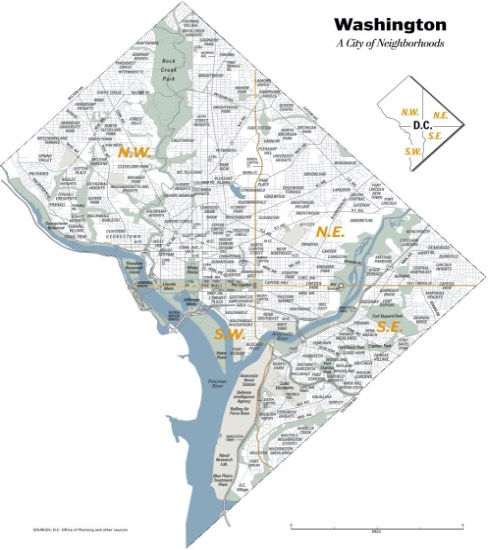 When the District of Columbia was born via a law in 1790, it was a square 10 miles on a side. So easy, right? 100 square miles! Most of the land came from Maryland, the rest from Virginia. Washington, Georgetown, Anacostia, and other “cities” were part of DC on the Maryland side, with the entire area called Washington County. On the Virginia side was Alexandria in Alexandria County, DC.

There has always been discomfort with the lack of representation of the residents of the area, so discussion of retrocession, where the two states would get their parts of the District back, were ongoing from 1801 on. However, it took 43 years before Virginia got their part back.

There were numerous reasons retrocession finally passed Congress, but significant among them was that Alexandria was a major port for the slave trade in Virginia, and the end of the slave trade in DC (which did happen in 1850) would have harmed Virginia’s economy.

Unlike Virginia’s residents, Maryland’s residents never seriously petitioned to have the District returned to Maryland, and DC residents have not recently wanted to be part of Maryland.

So DC is a weird shape, but discussion of DC’s lack of representation apparently never ends. Look for the canonical “Taxation Without Representation” on our license plates!

References
District of Columbia retrocession (Wikipedia)
“The Slave Trade and Alexandria’s Withdrawal From D.C.” from The Washington Post 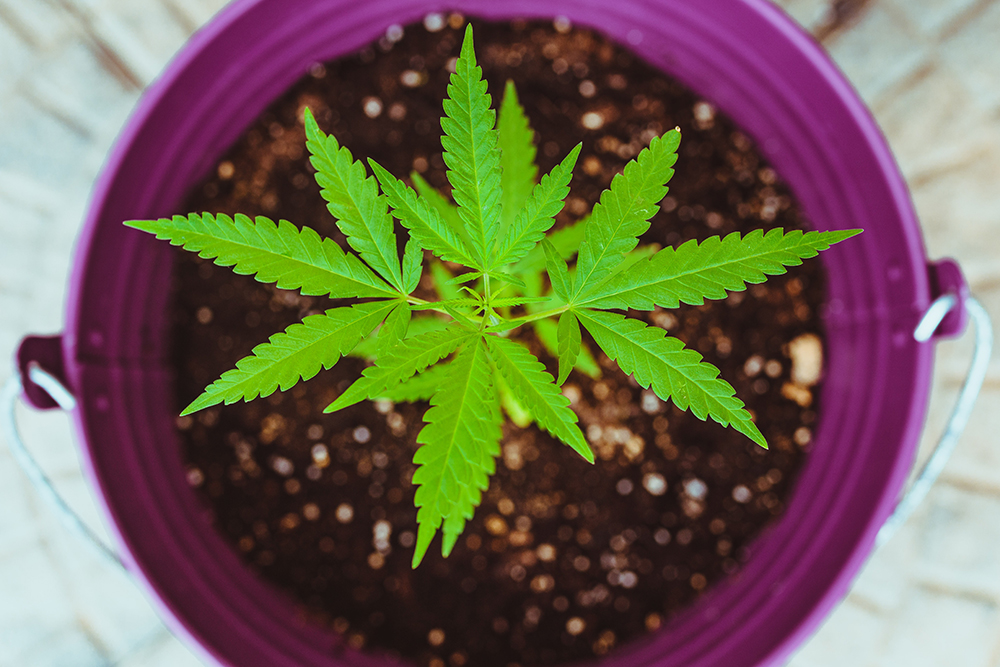 Image by Matthew Sichkaruk from Unsplash

In 1906, Congress prohibited marijuana in DC except as prescribed by a pharmacist. In 1970, under the Controlled Substances Act in 1970, it became as illegal in DC as it was everywhere else.

But that wasn’t even the START of the saga.

Medical pot was a DC voter-approved ballot initiative in 1998, and passed with 69% of the vote. But the Barr Amendment in Congress prohibited DC from using any funds to support the program until the Amendment was overturned 11 years later in 2009.

It took another 4 years for the first purchase of medical marijuana. By 2014, around 80% of DC residents (per survey) supported legalizing or decriminalizing marijuana, and in March 2014 the DC Council decriminalized possession. Congress again blocked funding for the law. The Harris Amendment banned the DC government from spending any funds to lessen penalties for Schedule 1 federal drug crimes.

In response a DC voter-approved ballot initiative was approved by 65% of voters and went into effect in February 2015. However, Congress again barred the use of any funds to administer the law or even to count the votes in favor of it. When DC tried to move forward anyway using a loophole in the law, Republicans in the House threatened prison time for the DC mayor. Currently there’s a ridiculous stalemate.

So…sorry, you can’t buy pot in DC. You can grow (6) pot plants. You can receive a gift of pot. But no money may change hands. Blame Congress, again. 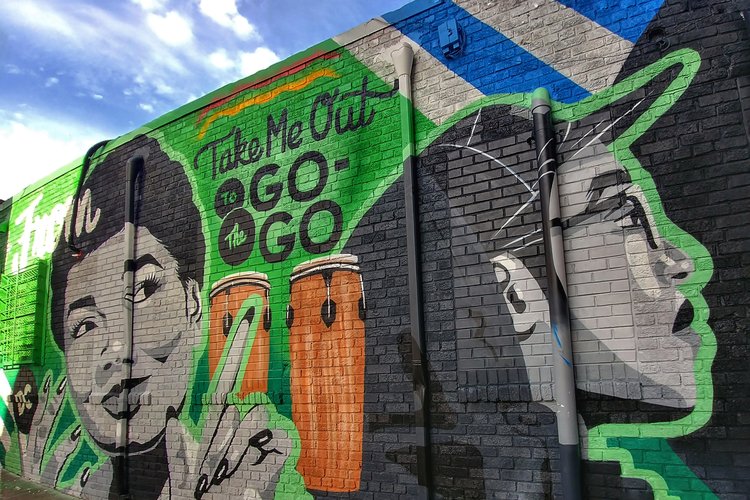 Image by Tim Wright from District of Murals

With origins in jazz, hip-hop, and most importantly funk, Go-Go music is a DC invention and is the official music of Washington, DC.

(Yes, “go-go boots” are etymologically related to “go-go music.” The etymology of “go-go” starts with a French word and gets weirder from there.)

The “godfather” of go-go is considered to be the amazing Chuck Brown. Junior conga drums are a signature of the genre, and there is often a swing beat, but as with most other genres there are no hard-and-fast rules for the music. You may have heard the 2007 go-go song by Mambo Sauce, “Welcome to D.C.,” playing before Wizards games. Google go-go and listen to some of it.

As the Smithsonian put it, “If you listen carefully, within the raw percussion and the funky grooves, you’ll hear the heartbeat and humanity of a very proud D.C. community.” Enjoy!

References:
24 Songs That Will Make You Love Go-Go (from Buzzfeed)
Go-Go (from Wikipedia)
All About Go-go (from The Beat is Go-Go)
Go-go, the funky, percussive music invented in Washington, D.C. (from the Smithsonian Institution)
Mambo Sauce – Welcome to DC (on YouTube Music)